How to Improve Your Email Engagement Rate

Consistently generating inbound leads with email marketing comes down to increasing the email's open rate and its click-through rate (CTR). However, both of these aforementioned criteria depend entirely upon your ability to infuse the email marketing campaign with attention-grabbing headlines, vivid-imagery and through-provoking content.

Before getting into the individual strategies for increasing email engagement rates, it's best to start by understanding the importance of A/B split testing. So, what is A/B split testing and why is it so critical to inbound lead generation?

A/B split testing is no more than a test of two iterations of your email campaign in order to define which one performs best, or better put, which one has a higher CTR. The "A" and "B" refer to different versions of the email campaign that are sent to the same number of email recipients.

If you need some basic guidelines on how to perform a split test yourself, then HubSpot has devoted a 10 step process to A/B split testing. However, the following example should more than clarify what's involved.

The biggest rule to follow is to make one change at a time and measure its impact on CTR. If you make two consecutive changes at the same time, then measuring which one impacted CTR is nothing more than guesswork.  So, now that you know how to test, perhaps it's best to discuss what to test. Recipients have to want to open your email. They need to be incentivized to act and that can't happen if your email's title isn't enticing enough. Use short, definitive statements that catch your reader's attention. High-value descriptive words and open-ended questions are critical. If you need guidance, then assume the role of a customer of yours and focus on answering the following questions.

• What concerns your customers most?
• What makes them move forward with a purchase?
• What are their biggest fears and concerns?
• What is the one solution all your customers want?
• Can you help resolve your customer's pain?

Humans are visual creatures. We are immediately drawn to colorful, brilliant and vibrant imagery. Black and white makes sense when you're trying to save ink on your printer. Images and visuals are a critical branding element and they must be included in your email campaign.

Use a definitive call to action right below the images and draw attention to deals and promotions with large colorful fonts. Finally, be sure to embed links in the images so that your email campaigns are more mobile-friendly.

Don't inundate your audience with repetitive and time-consuming content pieces. Focus on piquing their interest just enough to get them to click. You want them to read and be engaged, but not so much that they have no reason to visit your website because you've provided them with everything they need in the email. To simplify things, add a link like "learn more" that allows readers to go your company's website, read latest blog post or view your most recent video.

One on end of the spectrum are those inbound marketing agencies that don't use enough colors in email campaigns, and on the other end are those that use too much. The reason images are more impactful and vivid is because they're surrounded by whitespace. A well-spaced image, alongside interesting content, always wins the day. Boargworld.com has an interesting take on why whitespace matters. Again, none of your initiatives will bear fruit if you aren't willing to use split testing. However, don't just test the most obvious of variables. Instead, focus on a strategy of continually raising the bar by testing everything you can from one email campaign to the next. Your goal is to maximize returns by finding that all-important layout with the highest CTR. 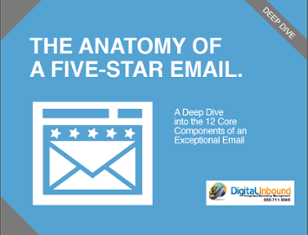